As the new chairman of Airport and Aviation Services (Sri Lanka) (Private) Limited, I take great pleasure in welcoming you to our airport.

It is a great privilege for me to be appointed by His excellency the President Gotabaya Rajapaksa to head the state owned company that operates, maintains and develops all civil airports in Sri Lanka. It is my sincere belief that my proven track record as a senior officer in the Sri Lanka army especially during the critical stages of the separatist war would have influenced his choice in the backdrop where national security has been given the paramount importance it deserves. I am grateful to his excellency for the honour bestowed on me.

I am thankful to the Minister of Industrial Exports and Investment Promotions, Tourism and Aviation, Hon. Prasanna Ranatunga for the explicit trust placed in me and for accepting me to chair an institution coming under his purview.

The company that has been entrusted to me is one that is performing extremely well both financially and operationally. We are a model for a profitable state owned establishment. We are also a much sought after state sector employer. Yet, the challenges that are looming ahead of us are enormous. I come to the picture at a time when our operational nerve centre, the Bandaranaike International Airport (BIA) is facing a severe capacity crunch with the steady and unprecedented growth in passenger movements and cargo volume. In addition, as the air navigation services provider for a large and mostly oceanic air space, we are faced with challenges in catering to increasingly congested air traffic flow. The air traffic in the Asia-Pacific region is expected to register the highest growth in the world in the coming decade and we need to keep abreast and be on par with the state of the art technologies that are essential and are already being deployed in other parts of the region. Acquiring and deploying those technologies as well as training and retaining personnel to man them are formidable challenges. On top of all these, we need to cope with current threats to the civil aviation industry both globally and locally. I am confident that the wealth of experience I possess as a senior military officer and a former provincial governor would prove to be a tremendous asset in providing leadership to our teams to propel through the aforesaid challenges.

One of my priorities as the Chairman would be to find short term as well as long term solutions to the pressing capacity problems at BIA whilst ensuring the highest standards of security and safety at all our airports. Making the “Mattala Rajapaksa International Airport (MRIA)” viable for both passenger and cargo operations accompanied by a strategic marketing plan to attract more air traffic to that airport would be another priority.

Whilst continuing to be a dependable revenue earner for the state, we wish to work in tandem with other stake holders of the industry to make the aviation industry, tourism industry, international trade and investment promotion more lucrative, thereby contributing to the national economy. Our aim is to make our airports the most sought after airports not only as destinations but also as transit points for other destinations in the region.

I wish you a memorable guest experience as you traverse through the service chain of our airports. 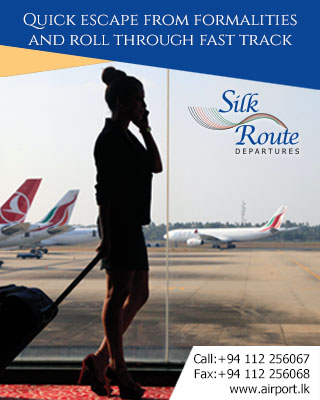